Close X
Make an Enquiry
Make an Enquiry
Contact Us
Book a Test Drive
Value My Vehicle
New Honda Civic Type R Introducing the New Honda Civic Type R View Vehicles In Stock
We have offers across the range and we are here to help find the best offer for you. We can also tailor a finance solution for you and also organise your part exchange. Please contact us for more information on our great range of offers. Send an Enquiry

The Type R dazzles from every angle but its striking design is not just for show. Racing performance is a key component of many external features, such as a smart winged spoiler, a shark fin antenna and 20-inch alloy wheels. Stylish touches include the ‘TYPE R’ legend boldly emblazoned on the vehicle’s front and rear fascia, and privacy glass. Illumination is provided by front fog lamps, LED daytime running lights and an LED high-mounted brake light.

The sporty cabin features an alloy shift knob and a leather steering wheel, which is also rake-and-reach-adjustable. The latter, in conjunction with a manually adjustable driver’s seat, enables you to quickly establish your optimal position. Black roof lining complements the vehicles sports seats, which are enhanced with ersatz suede upholstery. Electric-power steering, climate-controlled air-conditioning and power-operated windows are standard inclusions.

One of the most iconic cars in our line up has been transformed into a life-size LEGO® model.

While real Civic Type Rs pass through the Swindon plant at a rate of knots, this one took a little longer to bed. In fact, it’s the first hand-build Type R, with a team of nine taking over 1,300 hours to assemble it.

It’s comprised of 320,000 pieces and really is all-Lego, from the wheels, to the bodywork, to the windows – everything! It even features working lighting, controllable via an iPad application. It’s not just mains and rears, either. The brakes, fogs, indicators and day-runners work too. All in, it weighs just over 1,300 kilograms, which isn’t far off what the production car weighs. 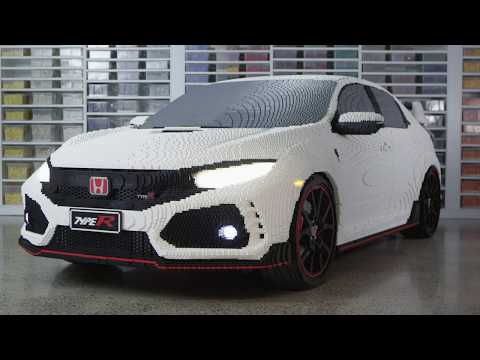 Free & Fast Online Part Exchange Valuations Interested in selling or part-exchanging? Use our tool to find out what your vehicle is worth. Value Now
Left Right
Honda Civic-Type-R
Loading...

Required cookies are essential to let you move around the website and use its features, such as accessing secure areas, shopping baskets and online billing. These cookies allow our website to provide services at your request.

Functionality cookies are used to remember the choices you make, e.g. your user name, log in details and language preferences. They also remember any customisations you make to the website to give you enhanced, more personal features.

Targeting cookies collect information about your browsing habits to deliver adverts which are more relevant to you and your interests. They also measure the effectiveness of advertising campaigns.

This site uses cookies and related technologies for site operation, analytics and third party advertising purposes as described in our Privacy and Data Processing Policy. You may choose to consent to our use of these technologies, or further manage your preferences. To opt-out of sharing with third parties information related to these technologies, select "Manage Settings" or submit a Do Not Sell My Personal Information request.